The Kingdom of Bhutan, also known as the land of the Thunder Dragon, is largely a mountainous Region spread across an area of 38,894 sq km. Set along the soaring ridges of eastern Himalayas, the kingdom is surrounded by the Tibetan Autonomous Region of China in the north and India to its south. Isolated from the rest of the world, people of Bhutan have preserved their vibrant culture and rich flora and fauna in their pristine form, thereby making this kingdom a popular destination to rejuvenate in the lap of nature.

Bordered by India and China, Bhutan is an independent kingdom that remained closed to the rest of the world until the 60s. Owing to this isolation, Bhutanese people have managed to preserve their cultural heritage, age-old traditions and environment in their immaculate state. Predominantly, people here practice Mahayana Buddhism that is reflected in almost every aspect of their lives. The landscape is dotted with various monasteries, prayers flags, and monuments and one can spot monks wearing saffron clothes almost at every step. Bhutanese folks are known to be warm and hospitable in nature. Their courteousness and chivalry is sure to impress any outsider.

The topography of this kingdom is mostly mountainous with 72% forested area. The government of Bhutan has laid down many rules in order to protect the abundant natural flora and fauna. This includes maintaining a minimum of 60% of the land under forest cover at all times. The government also follows a policy of ‘high value-low impact tourism’ to protect its environment and culture. In 2013, the kingdom got  enlisted amongst the top five places to visit by the New York Times and selected as the third finalist for the Tourism for Tomorrow Award 2013 by World Travel and Tourism Council. Besides, it is the only carbon negative country and the last surviving Mahayana Buddhist country.

With a growth rate of about 2.1% per year, the current population of Bhutan is about 700,000. 85% of them still live in rural areas. Mainly there are three ethnic groups in this country.

Sharchops: known to be the original inhabitants of Bhutan, these people are of the Indo Mongoloid origin
and reside in the eastern part of the kingdom.

Ngalops: reckoned to be descendants of Tibetan immigrants who came to Bhutan in the 9th century and inhabited the western region.

Lhotshampas: people of Nepalese origin, who arrived in Bhutan during the late 19th century and settled in the south of this country. This ethnic group comprises of different sub-groups; namely Brahman, Chettri, Gurung, Rai and Limbu.

Bhutan is a home to many endangered species of flora and fauna. With almost 72.5% of land covered with forest, the kingdom has been termed as the ‘Valley of Medicinal Herbs’. It was identified as one of the ten bio-diversity hot spots of the world in 1998 by Norman Myers. In 1992, Bhutan signed the United Nations Framework Convention on Climate Change in Rio de Janeiro in 1992 and the Convention on Biological Diversity.

Both the people and the Royal Government of Bhutan are keen to preserve their natural heritage. In order to do so, they have committed to follow the ‘Middle Path’ for development, whereby environment preservation will be an integral part of all the developmental plans. Disregarding the natural resources for the sake of short-term economic gains is highly condemned in this kingdom.

The name Bhutan can be derived in two ways. In Sanskrit, “Bhotant” means “the end of Tibet” and “Bhu-uttan” refers to the “high land”. The natives refer to it as Druk Yul- the Land of the Thunder Dragon.

The ancient documents begin telling the history of this kingdom from 747 A.D., the time when Guru Padma Sambhava also known as Guru Rinpoche arrived here from Tibet, flying on a tigress’s back. He landed in the Paro Valley, at a place called Taktsang Lhakhang or Tiger’s Nest. Guru Rinpoche is not only reckoned to be the originator of the Nyingmapa religious school but also known to be the second Buddha. By the middle ages, Buddhism became the predominant religion of this place.

It was under saint/administrator Shabdrung Ngawang Namgyal that the country was unified under Drukpa Kagyupa sect of Mahayana Buddhism in the 17th century. For the next two centuries, multiple civil wars led to the rise of regional governors. The Governor of Trongsa, Sir Ugyen Wangchuck, who overcame all his rivals, was accepted as the overall leader. He was voted as the first King of Bhutan in 1907. Presently, his great great grandson, King Jigme Khesar Namgyal Wangchuck sits on the throne.

The Kingdom offers free healthcare to all its citizens and there have been significant efforts to improve the medical facilities as well. The mark of 100% child immunization has almost been reached. Potable water is available to 50% of the population. There have been improvements in life expectancy and infant mortality rates.

Until the 1950s, monasteries were the only educational centers in the country. Though they still continue to play an important role, western education is accessible throughout the country. Basic education has been termed as an undeniable right of every citizen. The literacy rate has also significantly improved and continues to get better with implementation of adult education programs.

There is a democratic monarchy in the kingdom with His Majesty, King Jigme Khesar Namgyal Wangchuck as the head of the state. He is fifth in line of the Wangchuck dynasty and ascended the Golden Throne on 9th December 2006 and the public coronation ceremony was held on 1st November 2008 coinciding with the 100 years monarchy in Bhutan.

The main institutions facilitating ease of governance in the kingdom are the National Assembly, the National Council, the Judiciary, the Council of Ministers and the Sectoral Ministries. In order to make governance more inclusive, there are several mechanisms in place at the district, block and village levels.

Spread across an area of 38,394 km2, Bhutan is a landlocked country situated on the on the southern slopes of eastern Himalayas with India and the Tibet Autonomous Region bordering it. This elevated land lies between latitudes 26°N and 29°N, and longitudes 88°E and 93°E. The topography mainly comprises of steep mountains, lush green valleys and rivers draining into the Indian plains. The altitude ranges between 200m to 7,000 m, contributing to the biodiversity and variations in the ecosystem. This varied landscape adds to the variation in the climatic conditions, from subtropical to temperate to polar-type. It experiences five seasons distinctively; summer, monsoon, autumn, winter and spring.

The economy is largely dependent on agriculture and raising livestock with 80% of the population engaged in these sectors. Industrialization and mining are at a budding stage but showing rapid growth.

Hydroelectricity in Bhutan is the most important resource, which is exported to other countries and constitutes 25% of the government’s revenue. Other items being exported from Bhutan are calcium carbide, wood products, cement and agricultural products, such as, apples, oranges, cardamom, potatoes, asparagus, and mushrooms.

Tourism and airline industry, the means of earning foreign exchange, form a very small part of the Gross National Product.

Even though Bhutan is located between two of the most populated countries of the world, it has always been politically independent. This has been the single most crucial factor in the preservation of its native culture. Buddha’s teachings, introduced in this kingdom by Guru Padmasambhava, are strongly reflected in the daily lives of the citizens. Here, people have highly valued their traditions and followed them religiously. This embodiment has carved this nation’s identity. The uniqueness of character has been the base for all major policy formations and the means of survival as a sovereign kingdom.

Situated amongst the world’s highest peaks, the kingdom of Bhutan is a landlocked country with an approximate area of 46,500 square kilometers. It’s unique locations along with altitudinal and climatic variations attribute to the tremendous diversity of flora and fauna. Within the physical and biological diversities, Bhutan with 64% forest cover has some of the best remaining representative samples of the unique Himalayan Ecosystem. It has a pristine environment, with high rugged mountains and deep valleys.

Recognizing the importance of the environment, the government has enacted a law that shall maintain at least 60% of its forest cover for all time. Today, approximately 72% of the total land area of Bhutan is under forest cover and approximately 60% of the land area falls under protected areas comprising of 10 national parks and sanctuaries.

The vegetation varies enormously over the short distances, rending from tropical broadleaf forest to alpine shrubs and meadows. In addition, a prolific assortment of medicinal herbs dots the countryside as do over 40 species of rhododendron and numerous verities of oak. There forest provides habitats for a spectrum of faunal species such as tigers, elephants, greater one-horns rhinoceros, golden langur, blue sheep, musk deer, wolves, Leopards, Takins, Hispid hares, pygmy hogs, red pandas plus a wide range of birds like the black necked cranes, monal pheasants, lammergeiers (bearded vultures) and tragopans, many

Although geographically quite small, Bhutan’s weather varies from north to south and valley to valley, mainly depending upon the elevation. In the North of Bhutan on the borders with Tibet, it is perennially covered with snow. In the western, central and eastern Bhutan (Ha, Paro, Thimphu, Wandue, Trongsa, Bumthang, Trashi Yangtse, Lhuntse) you will mostly experience European-like weather. Winter lasts here from November to March. Punakha is an exception as it is in a lower valley and summer is hot and winter is pleasant. Southern Bhutan bordering with India is hot and humid with a sub-tropical climate. While the monsoon affects northern Indian it does not command the same influence in Bhutan. Summer months tend to be wetter with isolated showers predominately in the evenings only. Winter is by far the driest period while spring and autumn tend to be pleasant.

There are four distinct seasons similar in their divisions to those of Western Europe. Temperatures in the far south range from 15°C in winter (December to February) to 30°C in summer (June to August). In Thimphu the range is from -2.5°C in January to 25°C in August and with a rainfall of 100mm. In the high mountain regions, the average temperature is 0°C in winter and may reach 10°C in summer, with an average of 350mm of rain. Precipitation varies significantly with the elevation. The average rainfall varies from region to region. 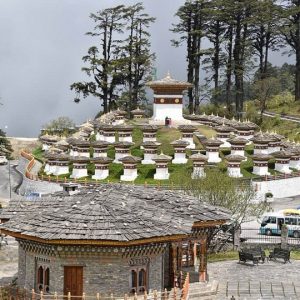